The weather was so nice today- a perfect late summer day. So, I went to my allotment garden and took a few photos for you. Can you believe that it’s already been over a month since the last garden update? I can tell you that it has changed quite a bit since last month. Two of our three apple trees are harvested and next week we’re getting those apples juiced. I’m so excited to see how much juice we’ll get! The prune tree is also quite empty and the blackberries are nearly done. But take a look yourself! There’s still a lot of stuff growing in my garden 😉

Let’s start with the regular garden beds. The pumpkin plants are growing like crazy and the zucchini plants also became pretty big. The celery grows very well. Our fourth garden bed is empty at the moment, but next week I’m going to plant garlic there, which will be ready to harvest around April. The leek (on the right side) grew a lot. I think I’m going to leave it a few more weeks, as it can easily tolerate the lower temperatures in fall.

So, here we have a more detailed photo of the zucchini and pumpkins. The zucchini are becoming sluggish, because it is way cooler than in summer, but I can still harvest enough for me. In contrast, the pumpkins are trying to take over the world. The two plants are already entering the surrounding garden beds, because they became so big. Furthermore they are crowded with little pumpkins and I can’t wait to finally start harvesting 🙂

I took a before-and-after-picture of the tomato house for you. On the left side you can see the tomato jungle- wild and untamed- and on the right side there is a slightly neater version after one hour of work. I cut a lot, tied up all the hanging parts and of course, I harvested the ripe tomatoes. Harvesting is my favorite part of gardening 😀 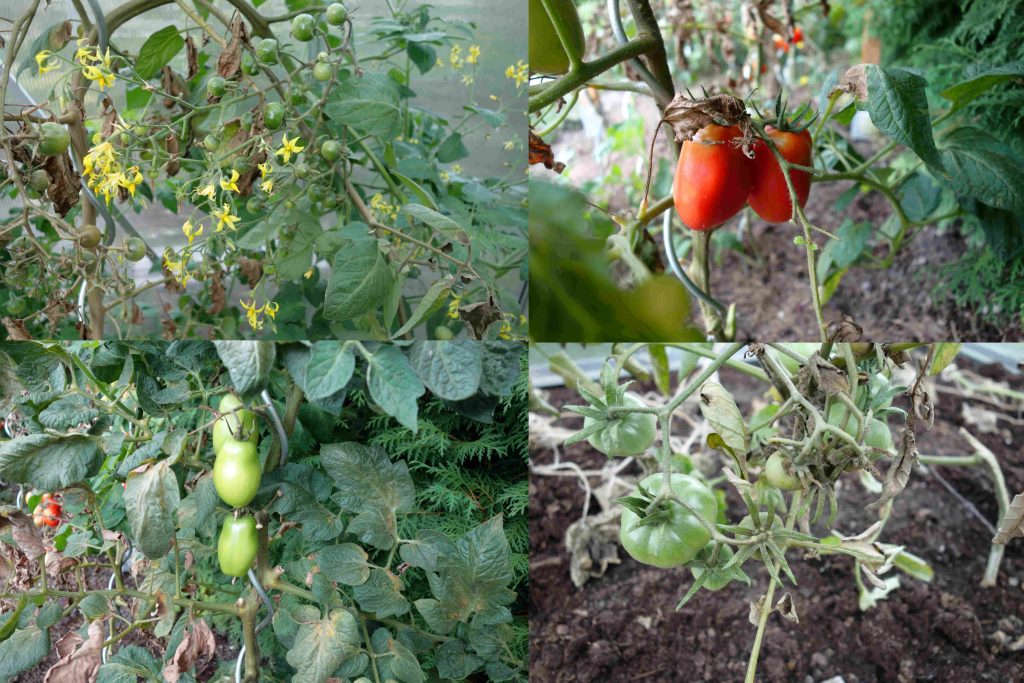 I have realized that I actually have three varieties of tomatoes this year: cocktail, roma and beefsteak tomatoes. I got only one plant of the beefsteak tomatoes, which my father in law gave to me. All in all, I’m quite happy with my tomatoes, even though I’m having problems with blossom end rot for the first time this year. At least there are still more than enough tomatoes to harvest 😉

There’s also a lot of stuff going on in my greenhouse, but things are going slow here and the veggies are taking their time to ripen. By the way, on the right side you can see the proof that my cucumber plants are still alive, even though the plants might look like they are already dying. The tomato is blooming like crazy and has lots of unripe fruits. We’ll see how long it can survive in a greenhouse. The sweet potatoes look good as well- actually they are trying to overtake the greenhouse 😉 I failed again at growing water melons, but I won’t give up, even though I don’t know what I’m doing wrong…

I’m going to finish this post off with some flowers- just like always. The roses are still blooming, even though there are less blossoms than before and my calendula is about to give up. I’m going to leave the last few flowers on, so it can reseed itself. The stonecrop is in full bloom and there are always a lot of bees, which makes us really happy. Well, I hope you liked this virtual tour around my garden.

See you next time!