Last weekend we had another round of synchronized baking 🙂 We made some incredibly delicious croissants following a recipe by the amazing Julia Child and it was a feast. Furthermore, it was a great experience to do a puff pastry myself and croissants had been on my list like forever. Of course I changed up the recipe a bit and I baked with spelt flour. Just have a look at the results! 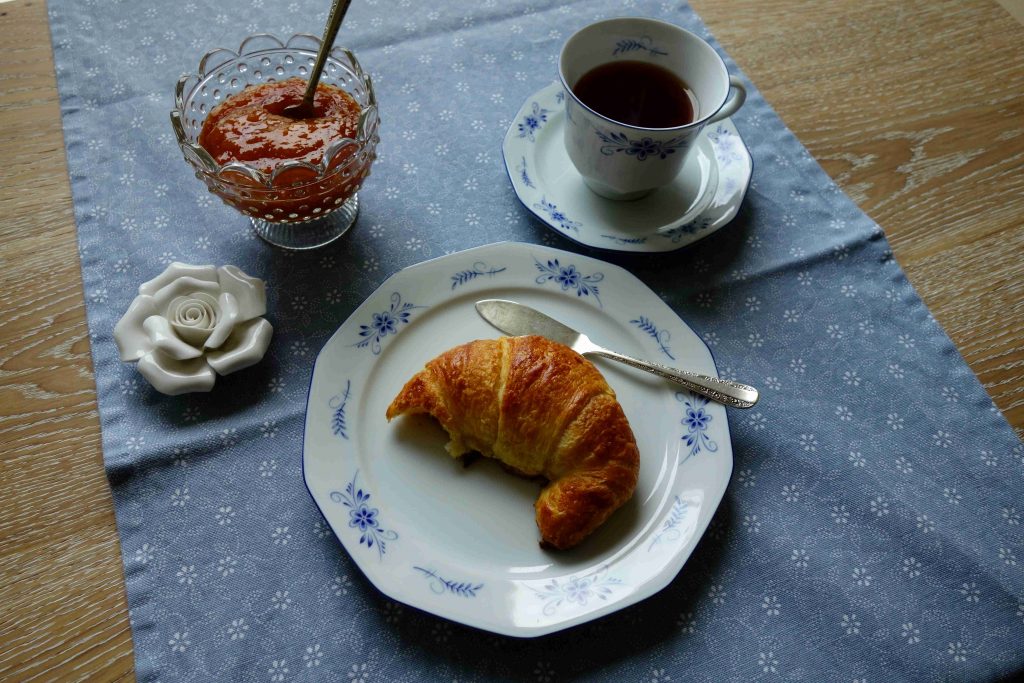 First pour the yeast and sugar in the bowl of your food processor and dissolve them in 60ml of warm water. Let the mixture rest until it starts to bubble. Next you warm the milk and water in a small pot and dissolve the sugar and salt in it. Now pour the flour, milk mixture and oil in the bowl of your food processor as well. Bring everything together on speed 1 for 8 minutes using a dough hook. A smooth dough, which separates from the bowl, should form. Then you cover the bowl with a clean tea towel and let the dough rise for three hours at room temperature.

When the dough has tripled its volume, put it on the lightly floured countertop and push it into a rectangle of 20x30cm with your hands. Fold it in three like a letter and put it back into your bowl. Cover and let it rise for another one and a half hours at room temperature. Thereby it should double its volume.

In the meantime you can prepare your butter plate. It should have a size of 25x19cm. I just cut a 250g block of butter into three slices lengthwise and another 50g of butter in just three slices. Then I put all my butter slices in a rectangular shape on a piece of parchment paper, covered it with another piece of parchment paper and rolled it into the wanted size using a rolling pin. In the end you just put the butter plate into the fridge until you need it.

As soon as the dough has doubled its volume, put it on the lightly floured countertop and roll it into a rectangle of 35x20cm. Then you put the butter plate on the left side. Now fold the right third over half of the butter plate and the left side over the right side. Next you carefully and slowly roll the dough to 35x20cm again. The butter must stay inside the dough! Then fold the dough again like shown in the pictures above- just without the butter. Roll it into the same size as before, fold it and put it in a box. Then the dough has to rest in the fridge for two hours.

After that you take it out of the fridge and put it on the lightly floured countertop. Let it rest for a few minutes and then make another two rounds of rolling and folding. Next you put it back in the fridge for another two hours. I froze my dough at that point, because I didn’t have the time to finish my croissants until two days later. You can also put it in the fridge and lay something heavy on it, if you want to finish your croissants the next morning.

The next day you take your dough out of the fridge and separate it into three pieces. Put one of your pieces on the floured countertop and the other two ones back in the fridge. Roll your dough to a square of 25x25cm and cut it diagonally twice to make four triangles. Roll out the triangles to get your desired shape and roll them up to form croissants. Work the remaining two pieces of dough the same way. Then put the croissants on a backing tray, cover them with a tea towel and let them rise at room temperature until their volume has tripled. This may take two to three hours.

Preheat your oven to 220°C and whisk up one egg with a teaspoon of water. Brush the croissants with the egg mixture and bake them for 12 to 15 minutes until golden brown. Then you put them on a rack to cool down for at least ten minutes before eating them.

Some advice for you: I only baked one third of the dough. The rest of the prepared croissants went directly to the freezer. That way you can just pop them out of the freezer in the evening, let them defrost in the fridge and bake them right away the next morning. This will make a perfect and effortless breakfast. Furthermore, I made a mixture of big and small croissants, because the small ones are perfect for a brunch. I always like to eat as many different things as possible at a brunch- how about you?